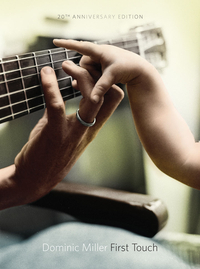 In 1995 Dominic released his first solo album "First Touch". This was followed up by ten more albums up until today.
Bit by bit the press and live audiences have been won over becoming increasingly enthusiastic about the harmonic qualities of this guitar all-rounder.

Dominic receives regular euphoric reviews in which terms such as grace, sensitivity and sensuality pepper descriptions. If he More and more often when not touring with Sting his is on tour worldwide with his own top-class band.

Many of his fans still consider this debut album "First Touch", which was self-released, to be amongst his best. Now, after 20 years, it has been remastered with three bonus tracks.